Flag football is a version of American football where the basic rules of the game are similar to those of the mainstream game (often called “tackle football” for contrast), but instead of tackling players to the ground, the defensive team must remove a flag or flag belt from the ball carrier (“deflagging”) to end a down. The specific rules of flag football vary widely by league, though all share in common their replication of the rules of traditional American football with tackling replaced by flag-pulling. Traditional American football rules are often omitted or simplified to reflect the more recreational nature of the game, desire to avoid physical contact and injury, and the generally smaller number of participating players per side. 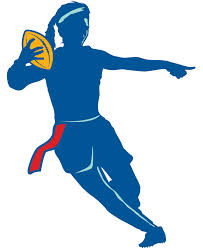 In Belgium, Flag Football is played by youth under 15 years old and it allows them to learn the basic rules of American Football and prepares them to play tackle football when they are getting older.

To learn more about Flag Football rules, you can open the following link: